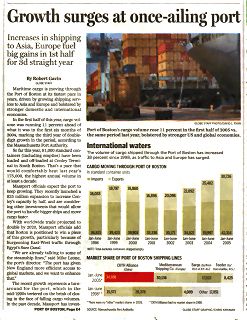 Maritime cargo is moving through the Port of Boston at its fastest pace in years, driven by growing shipping services to Asia and Europe and bolstered by stronger domestic and international economies.

In the first half of this year, cargo volume was running 11 percent ahead of what it was in the first six months of 2004, marking the third year of double-digit growth in the period, according to the Massachusetts Port Authority.

So far this year, 91,000 standard containers (including empties) have been loaded and off-loaded at Conley Terminal in South Boston. That's a pace that would comfortably beat last year's 175,000, the highest annual volume in at least a decade.

Massport officials expect the port to keep growing. They recently launched a $25 million expansion to increase Conley's capacity by half, and are considering other investments that would allow the port to handle bigger ships and move cargo faster.

With worldwide trade projected to double by 2020, Massport officials add that Boston is positioned to win a piece of this growth, particularly because of burgeoning East-West traffic through Egypt's Suez Canal.

'We are already talking to some of the steamship lines," said Mike Leone, the port's director. 'The port has given New England more efficient access to global markets, and we want to enhance that."

The recent growth represents a turnaround for the port, which in the mid-1990s teetered on the brink of closing in the face of falling cargo volumes. In the past decade, Massport has invested about $50 million to upgrade facilities and convinced a consortium of Chinese shipping lines to provide direct service from Boston to Asia.

In the three years since the service began, the consortium, led by China Ocean Shipping Co., has increased cargo volume fivefold, becoming the port's biggest carrier. The Chinese consortium accounted for nearly 40 percent of cargo volume in the first six months of 2005, as well as much of the port's cargo increase.

A European carrier, Mediterranean Shipping Co., also has expanded its direct service from Boston to Europe, providing regular runs to both Northern Europe and the Mediterranean.

Imports exceed exports at the Port of Boston, but exports -- from waste paper to seafood to medical equipment -- are growing at a faster rate. Exports rose 21 percent in the first half of the year from 2004, compared to a 6 percent increase in imports, according to Massport.

The growth in exports is largely driven by China, where a manufacturing boom is gobbling up scrap and raw materials, economists said. At the same time, an improving New England economy is boosting consumer demand and imports.

All in all, Boston remains a small port, dwarfed by the Port of New York and New Jersey, which handles about 25 times more cargo. And Boston is likely to remain relatively small, industry analysts said.

For example, Boston Hides & Furs Ltd., of Chelsea, which exports animal hides to tanneries in China and Europe, used to barge its products to New York, where they were then shipped overseas. Now, able to ship directly to its markets, the company saves hundreds of dollars per container, and ultimately hundreds of thousands a year, said Harvey Shore, chief financial officer.

Kraft said the company, one of a family of firms controlled by New England Patriots owner Robert Kraft, is on track to double its exports from Boston.

'The most important development for us was the direct port calls," said Dan Kraft, one of Robert Kraft's sons. 'Prior to that, we hardly shipped anything out of Boston, and ironically, we were a Boston-based company."

Ultimately, a deep-water port is a key advantage in the global economy, analysts said. But Massport will have to keep investing in equipment and facilities to stay competitive.

'They have to remain efficient," said Jay McCabe, president of Intral Corp., a Boston logistics firm. 'The whole idea is to keep ships moving. They're not making any money at the pier."